Walmart’s ambitious plan to build thousands of low-cost health clinics across the country is slowing down, less than two years after the retail giant embarked on a big push to expand access to primary care.

Walmart launched its first comprehensive health center in September 2019. The one-stop-shop clinics were an attempt to leapfrog the competition and capture a piece of the $3.8 trillion industry, while sending more people into Walmart stores.

In an industry notorious for opaque prices, the health centers sought to disrupt the space with transparent cash prices for a variety of services, including primary care, dental exams, vision tests, counseling, X-rays, and diagnostics. Seeing a primary-care doctor costs $40, even for people without health insurance.

Walmart’s vision was to become “America’s neighborhood health destination.” The push deeper into healthcare came as competitors like Amazon and CVS Health also bulked up their healthcare ambitions.

Now Walmart’s clinic strategy is in flux, Insider has learned from conversations with eight current and former employees, most of whom spoke on condition of anonymity as they were not authorized to speak with the press because of confidentiality agreements. Their identities are known to Insider.

The most concrete sign of the slowdown is that the company isn’t on track to meet its earlier projections for the number of clinics it wants to build this year, according to documents obtained by Insider. There are now no set numerical goals to expand the clinics, three current employees and one former employee said.

Walmart’s board of directors approved a plan in November 2018 to build 4,000 clinics by 2029, according to a former employee with direct knowledge of the meeting.

Walmart didn’t share the 10-year strategy widely throughout the company or with the public.

To date, Walmart has opened 20 clinics, the company confirmed.

A recent company blog post outlined plans to have a total of at least 22 clinics up and running nationwide in 2021. Two employees told Insider Walmart initially planned to open more than 30 clinics in Florida this year, but that has been scaled back to about 15.

Why Walmart’s health-clinic push has slowed

Leadership changes, competing business priorities brought on by the coronavirus pandemic, and the complexity of scaling a massive healthcare operation have slowed the clinic rollout, one current employee and two former employees told Insider.

“There is less commitment to the strategy,” one of them, a Walmart employee close to the healthcare operation, said. “What you have today is an organization that’s playing the waiting game — waiting for a core strategic choice to be made.”

Two current employees said Walmart was not aiming to get a set number of clinics built this year.

Still, several current employees said Walmart continued to back the clinic strategy, adding Walmart was still building clinics and that healthcare was still a priority.

In a statement to Insider, Walmart said it continued to “experiment” with Walmart Health centers and that the pandemic had reaffirmed its commitment to healthcare. It pointed to the launch of pharmacy curbside delivery, COVID-19 testing sites, and vaccine administration as evidence.

Walmart did not comment on whether the rollout of the clinics had slowed.

“Walmart customers want high quality, preventative, affordable and accessible healthcare and they trust Walmart to provide it,” Marilee McInnis, a Walmart spokesperson, told Insider in an email. “Even during this difficult year, we launched Walmart Insurance Services, acquired CareZone technology to accelerate our digital offerings, elevated our top Health and Wellness leadership position, and increased our focus on racial equity in health care.”

Walmart is no stranger to healthcare. It has 4,700 pharmacies and 3,400 vision centers. It rolled out a program in 2006 to give customers access to $4 generic drugs.

It has also tested in-store medical clinics, with little success. In 2007, Walmart’s then-CEO, Lee Scott, announced plans to open as many as 2,000 clinics by mid-2012. By 2013, the company had fewer than 130 of these clinics, Bloomberg reported at the time.

But the company’s key competitors were beginning to make bigger moves.

Amazon, which was already stealing retail customers from Walmart, marked its entrance into healthcare with its $750 million acquisition of the online pharmacy PillPack, which was completed in September 2018.

Later that year, the pharmacy chain CVS Health closed its acquisition of the health insurer Aetna. CVS began rolling out “Health Hub” clinics in stores in early 2019 to provide screenings and chronic care to patients. It plans to open 1,500 Health Hubs by the end of 2021.

Walgreens, meanwhile, started piloting in-store clinics known as “health corners.” It’s partnering with VillageMD to build out 500 to 700 primary-care clinics in its pharmacies.

Walmart needed to catch up, and Greg Foran made it a top priority during his tenure as CEO of Walmart’s US operations.

In 2018, Foran hired Sean Slovenski, a former Humana executive, to come up with a big idea. They landed on the integrated health centers, designed to do for healthcare what Walmart’s supercenter stores did for retail: offer a breadth of services conveniently and at a much cheaper price point than rivals.

“I sensed it was a game changer,” James Gardner, a retail-health consultant, told Insider.

But the board of directors at the time was divided. There were some who were wary of going deeper into healthcare and some who wanted to push forward without inviting too much risk to the main business, according to a former Walmart employee with direct knowledge of the matter.

Foran and Slovenski prevailed. The board approved a long-term strategic initiative to build Walmart Health and its 4,000 clinics. It would cost $11 billion, the former employee said, with $8 billion of that paid back in profits by the end of year six.

Foran declined to comment on the board meetings or healthcare strategy.

Slovenski, who left the company over the summer, declined to comment on the details of the story, citing a nondisclosure agreement. He said it would be a disappointment if the company were easing up in healthcare.

“Watching the aggressive progress many other retailers are making in healthcare, I still believe Walmart is the best positioned to have the greatest impact in the US out of them all,” he said.

Walmart Health was set up as a separate entity from the mother ship, with its own profit and loss statement. The first two clinics opened in September 2019 and January 2020, both in areas of Georgia that lacked enough primary care.

At Walmart, long-term bets like this are never guaranteed, one former employee said. They’re typically reviewed quarterly and annually to see if they should get continued funding. The board can kill a business at any stage of the plan, whether it’s year one or year nine of 10, they said.

But the number of people visiting the early clinics was double the health team’s expectations, a former employee and a current employee said.

Many customers paid with cash because it was cheaper for them than using insurance. Some drove up to 90 minutes for doctor’s appointments, according to the former employee.

The early traction put individual clinics on a fast track to paying for themselves within two years, the person said. The first clinic cost about $6 million to build, but the cost decreased to about $2.5 million as Walmart refined the construction process. Each made between $15 million and $20 million in annual revenue, they said.

A new CEO and pandemic have complicated the clinic rollout

Walmart Health lost its biggest champion when Foran left the company in 2019, followed by Slovenski in August. Foran is now the CEO of Air New Zealand Group, and Slovenski runs the testing startup BioIQ.

Foran’s successor is John Furner, a longtime Walmart executive who previously led its Sam’s Club business. He’s made investments in the company’s ability to compete with online retailers like Amazon during a pandemic that’s sent more shoppers online.

The coronavirus pandemic has fueled Walmart’s online sales and pushed the company to invest more in e-commerce, automating stores, and standing up a membership program to compete with Amazon Prime. Amazon is on track to eclipse Walmart in total retail sales by 2022, according to an October research note by Evercore ISI analysts.

The primary-care-clinic strategy has become less central to Walmart’s strategy, despite early signs that the business could have fueled Walmart’s bottom line once it reached national scale.

To be sure, another former employee said Walmart Health leadership failed to convince the rest of the organization that investing in the clinics would benefit the entire Walmart enterprise in the long term.

“We didn’t do a great job of painting the picture of why you should be giving up square footage for something that you don’t see so quickly on the P&L,” that former employee said.

Marcus Osborne, Walmart’s internal lead for health plans, took over the clinics from Slovenski. Lori Flees, a former Sam’s Club executive, has been leading operations since the summer.

In December, Furner brought in Dr. Cheryl Pegus to lead the entire health and wellness division, which encompasses the clinics, pharmacies, and other health bets. Pegus previously served as the chief medical officer and president of consumer health solutions at Cambia Health Solutions, a company that operates health plans in four states.

Pegus’ stamp on the direction of the business remains to be seen. But under new leadership, the health team has been reassessing its strategy.

That’s different from the team under Slovenski that wanted to move fast and favored the cash-pay model.

“We’re trying to get to a model for the business that is ultimately scalable. So we’re in that exploration phase,” a person close to the health business said. “The openings that we’re doing are intended to help us further refine and test the model.”

One person familiar with the clinics said there was good reason to pump the brakes: The clinics don’t have the infrastructure to keep up with patients over time, making their care, especially for chronic conditions, more basic. With so many patients coming in, it can also be hard to schedule them with their preferred doctor and communicate about their medication, the person said.

By the end of 2021, Walmart’s clinics will be in at least four states: Arkansas, Georgia, Florida, and Illinois.

“It’s not going away. It’s just not at the speed they had hoped,” one former employee in Walmart’s healthcare business said.

Thousands of hospital workers sickened with COVID since start of pandemic

Mon Feb 22 , 2021
Like grocery store workers and other essential employees, their jobs cannot be done from home. “As front-liners, we can do everything right but still be exposed because we’re exposed at work, which we simply can’t avoid,” said Dr. David Rosman, a radiologist at Massachusetts General Hospital and president of the […] 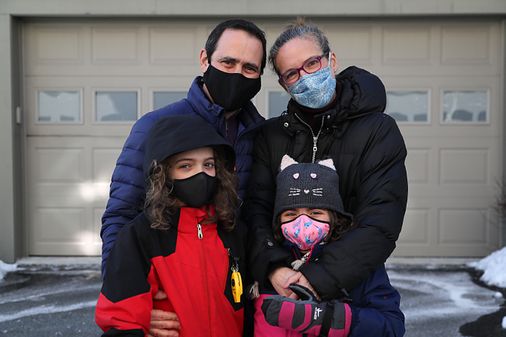